Retrofit elevator projects are common for Phoenix Modular Elevator. However, the challenge in this case was to build and install a durable retrofit custom elevator in the middle of an existing five-story building quickly.

The purpose of the elevator was to increase accessibility for students, faculty, staff and visitors to Morthland College. It was very important for college that the project to be completed as fast as possible so there would be minimal interruption between semesters and at a reasonable cost.
Also, durability was a major concern. As the elevator would be open to the public, including to students it had to be tough. With full access granted to everyone use would be high during semesters so it had to be ready to take the rigors of a lot of use.

The Phoenix Modular Elevator team met with the Morthland personnel and discussed the goals and needs of the project. They then went to work with the goals in mind to produce the solution they needed. 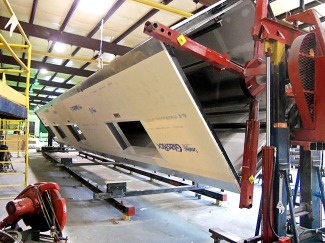 Like most projects the Morthland elevator was created with a frame of durable 4×4 inch steel beams. Once the frame was welded, aligned, squared and plumbed, it was covered in fire-rated drywall. What makes Phoenix Modular Elevator so unique is that the elevator is constructed horizontally and the hoistway can be rotated so the entire project can be worked on safely.

The elevator doors and frames were then put in place and the internal workings of the elevator were installed and aligned. This means that the guide rails will be set up properly as they are easily accessed for inspection during the build. Unlike the out of date method of building a hoistway on a job site and then putting all the parts together from the inside vertically, we build ours to be easily rotated. One of the final steps is the insertion of the elevator car, final wiring, testing and inspection.

Of course prior to the final placement a pit area needed to be prepped. For this particular project a single in-ground hydraulic jack was used. When the pit floor was poured anchor 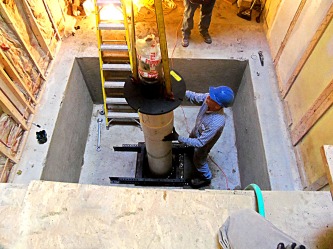 bars were placed in the corners for the completed elevator and hoistway and a hole was left in the middle of the pit for drilling the in-ground jack hole. The hole was drilled, lined and the jack was put into place. The lining of the hole is crucial as it protects against possible future leaks of hydraulic fluid. Once all the preparation was completed, the entire finished elevator was lowered down the hoistway through the roof into the pit.

This project was completed quickly as requested. From the time we received the approved plans the elevator was built in our factory in less than eight weeks, then transported to the main building on campus and install in less than one week.  Phoenix Modular Elevator has the shortest lead time of any commercial grade elevator. Also, the design was durable and we were able to complete the project under budget.

This blog is brought to you by:

To Get An Elevator Start Here!

What do you want to know about elevators?